In London, life could be nasty, brutish and short – especially for traitors. Those condemned to death were confronted by masked executioners and baying crowds who were lusting for blood and justice and who weren’t big on health and safety.  Visit chilling execution spots, walk the final steps of the condemned and witness the last remaining site in London where traitors’ heads were publicly displayed. From the site where nobles were beheaded to the secret spot where heretics were burned at the stake, this walk takes in the grisly fate of Lady Jane Grey, Gunpowder Plotters and body-snatchers – via 18th century prison cells and the last vestiges of the legendary Newgate Prison. Guided by Dan P., author and documentaries producer.

Guided by Dan P.
Prisoners only went through Traitor’s Gate in one direction. Where did they find themselves on the other side?
Prisoners were taken by boat through Traitors’ Gate into the Tower of London. Those condemned to death were usually publicly executed outside the walls on Tower Hill. A few (high-ranking royals usually) were beheaded privately within the walls. 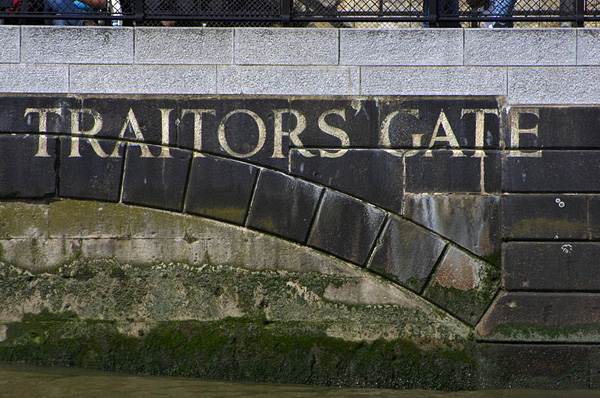