The City of London is where it all began. This walk starts at the beginning of London’s history, covering the arrival of the Romans 2,000 years ago. The Saxons, Vikings and medieval monarchs all left their mark on the City’s history. In 1666 the Great Fire destroyed three-quarters of London – and in the rush to rebuild their city, Londoners rejected talk of a renaissance grid and simply maintained the ancient street pattern. Like a phoenix from the ashes, a new city grew up on the foundations of the old one which is why many of the narrow winding streets have barely changed in centuries. From Wren’s Monument commemorating the Fire to the monumental Guildhall, we visit London through the ages.

Guided by EdAs well as walking tours, Ed is also offering London Black Taxi Tours – visiting Westminster, Abbey Road – home of the Beatles – and London’s other must-see sites.
A black circle in one of the City’s most famous open spaces marks an exciting discovery made in 1985. What was it?
In 1985, archaeologists discovered the Roman remains of London’s amphitheatre – the venue for spectacular entertainments. Its foundations were found beneath Guildhall Yard. Guildhall was itself once the site of show-trials and is still the home of the City’s local authority. 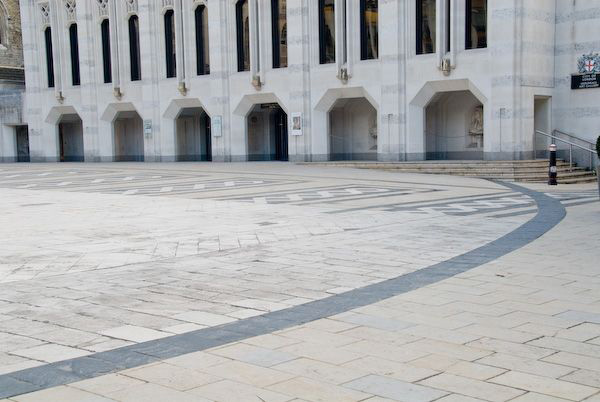