430 years ago, the young William Shakespeare left his wife and children in Stratford to start a new life in London. Rising from obscurity to superstar, he cut a swath through London society, attracting admirers, copycats, lawsuits, critics and the odd begging letter. In his early life in London, he lived in rented accommodation and got into trouble for not paying his taxes. By the end of his life, he owned property in fashionable Blackfriars. We visit the places he lived and worked, taking in some of the most beautiful sites in the ancient/modern City of London, including a magnificent 16th Century hall in which his company performed. Guided by Ian F, Historian and lawyer.

Guided by Ian F.
Shakespeare's company performed beneath this ceiling 400 years ago. Where is it?
This is the hammerbeam ceiling of Middle Temple Hall, where for more than four centuries lawyers, law students and judges have dined and been entertained together.  In 1602 law student John Manning wrote in his diary about a performance of Shakespeare's Twelfth Night that took place in the Hall. 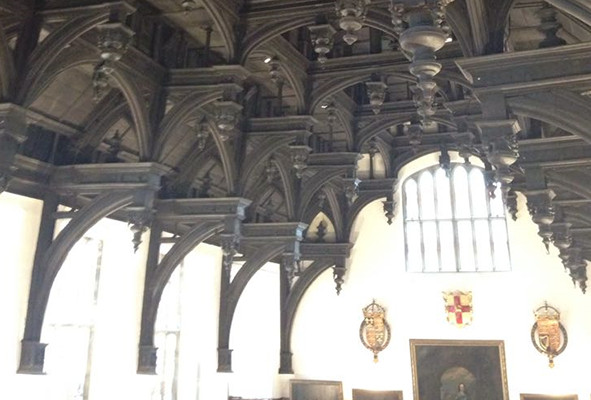